Sushi is thought to be an acquired taste and might not be for everyone, but Executive Chef Akira Back has put together a menu at Yellowtail Sushi Restaurant & Bar at Bellagio that will change that. Sushi is just the beginning, as the original menu at Yellowtail rivals the beauty of its setting. 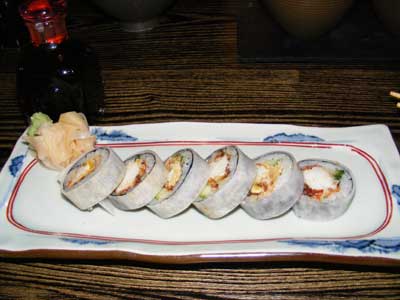 Chef Back took the Japanese menu and put his own twist on it in a way that will bring satisfaction to any and all taste buds. I will say I am not only a novice when it comes to sushi, but it would not be my first choice when it comes to dining. In amazing fashion, Chef Back changed my mind. Not only did he provide two dishes that passed the taste test, but they were so tantalizing they have made me a fan of sushi—at least at Yellowtail. The softshell crab was the best I have ever tried. I would say the ginger added a nice flavor, but what really set this dish apart was the crunchy texture of the tempura; it was a delightful extra touch. The second sushi dish that grabbed my taste buds was the poppin’ spicy crab. Sometimes you hear that a dish is original, and well it might not be all that original; I promise you, this one is. The secret ingredient is Pop Rocks®. You can hear the sushi popping when it is served, and you can feel the popping as you are eating it. This dish does a wonderful job of walking you through the layers of flavor. The first sensation is, of course, the popping, which starts you off with a sweetness and just a hint of crunchy texture. Next you receive the crab, well-blended with just a slight flavoring from cucumber and asparagus; finally, just as you are about to finish, you are given that final kick of spice that finishes this off in very nice fashion: not too hot, but just a nice, subtle transition, the same as the other flavors. Chef Back relayed the story of how he came up with the idea of using Pop Rocks® in his original recipe: when he was young, he did not like fish. His mother would bribe him not just with money to eat his fish, but she would also sweeten the pot by adding candy to her fish dishes. He kept that clever idea in mind all these years, and finally put it to use.